Russell’s Outstanding Knock Powered KKR To Get A Good Score! 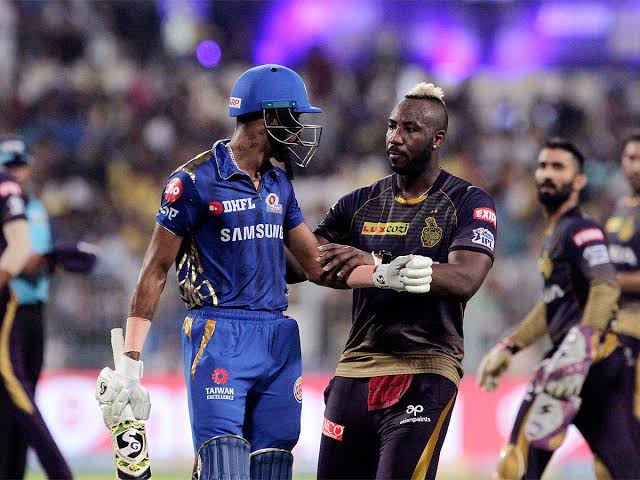 The way KKR dominated the 61st match against SRH shows their confident team performance in all the departments in the match. KKR batted; first, they got a score with which the bowlers could get a chance to put the opponents under pressure. Though KKR hasn’t scored an unchangeable score, where they reached was not a bad score either.

KKR was having a problem with their opening combination; they have experimented with five opening combinations throughout the league. Today too, VR Iyer – the KKR opener, was dismissed early. He was dismissed by knocking off his off stump. Rana is the man who has kept some consistency; today, in match 61, too, he was looking good. He started with drilling Natarajan for outside off deliveries in the fifth over and followed that with a hailing maximum over mid-on fence. The same over saw another six, over the boundary Rana was whipping off. Rana and Rahane, who were initially looking splendid in touch – were cleared off by Umrah Malik.

The Kolkata skipper also looked very uncomfortable, and he too was dismissed by Malik – he was driving a fast delivery, losing control, and it landed up in the extra cover for an easy catch. When Rinku Singh, too, was cleared off, Russell came into the middle. The same Umran Malik was being dealt with by him with much comfort and confidence that day. He began with a boundary, fiercely hammering Umran straight-through wide mid-off.

Natarajan also was being hammered, so high a six it was at the final delivery of the fifteenth over – that the ball went smacked away over the stadium. Bhubaneswar Kumar has been successful in beautiful seam bowling. Still, this day in front of Russell, he was clueless, starting with a boundary from a full toss over leg stumps – he ended the over with a boundary. Bhubaneswar attempted a Yorker but ended up with a full toss.

Billings was striking; the partnership between him and Russell was going well. But in the meantime, at the final delivery of the nineteenth over, he too was caught at extra cover. At last over, Russell welcomed to run with three consequent sixes; he, by footwork, was transforming Yorkers into full tosses and was taking full advantage of it. Russell was a spectacularly dominating performance, who again slogged the final delivery over the mid-wicket fence. He scored a stormy knock of unbeaten 49.

On the other hand, with the ball in hand, he also got three impressive wickets. If KKR ultimately got two points, his man has made it possible. People who have rightly picked Russell up in their online fantasy cricket teams would be pleased both the ways round. Russell was the deserving player of the match award, which is what happened as well. However, fantasy cricket is a virtual platform where millions of cricket buffs worldwide can create their teams and score points accordingly. It is all about selcting the right players for your team that will score well so you can win.